“Your righteousness is righteous forever, and your law is true.” (Psalms 119:142)

"Human beings, all over the earth, have this curious idea that they ought to behave in a certain way, and can't really get rid of it…Whenever you find a man who says he doesn't believe in a real Right and Wrong, you will find the same man going back on this a moment later." (C.S. Lewis – Mere Christianity)

Atheist Richard Dawkins spends a lot of time addressing the “evils” of religion. "How much do we regard children as being the property of their parents?" Dawkins asks. "It's one thing to say people should be free to believe whatever they like, but should they be free to impose their beliefs on their children? Is there something to be said for society stepping in? What about bringing up children to believe manifest falsehoods?"

Two issues must be raised here. First of all, on what grounds does an atheistic evolutionist approach moral issues? Second, what type of standard will “society” use to determine whether or not to “step in” regarding what parents teach their children? We have a pretty good glimpse at what Dawkins sees as the final authority on ethics: “society”, i.e. the State. Is “society” the final determiner of ethics? If that is the case, we would have to justify every action that a civil government has ever taken. If the state is the final authority, then Nero, Hitler, and Stalin cannot be looked at as unethical in their actions.

In a different but equally futile search for “secular” ethics, fellow atheist Sam Harris, writes, “The truth is that the only rational basis for morality is a concern for the happiness and suffering of other conscious beings.” (Do We Really Need Bad Reasons To Be Good? by Sam Harris / Boston Globe October 22, 2006). Obviously, such a standard is highly subjective. Pedophiles are “happy” when they are molesting children. Religion makes some people happy, yet Dawkins calls it evil. As we saw in a previous blog, happiness itself is really no different from suffering in an atheistic worldview. Both are merely emotional entities created by human neurons in response to certain stimuli. What makes one superior to the other?

If the naturalistic worldview is correct, then there are no moral absolute 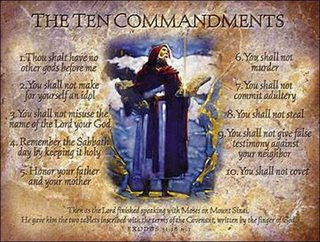 s, and for an atheist to appeal any, especially in regards to religion, is the highest form of hypocrisy. Dawkins himself asks, “…by what route has the human brain gained its tendency to have ethics and morals, a feeling of right and wrong?” He never answers the question, because he has no answer, thus portraying the futility of an atheist to establish any form of an ethical argument. In order for Dawkins to maintain his argument that religion is evil, he has to acknowledge the existence of evil, borrowing it from the very worldview he decries. Human beings (even Dawkins) have an inherent knowledge of right and wrong, even though they fail to measure up to it themselves. Where does the knowledge come from? The reality is that, if such knowledge doesn’t come from God, it really doesn’t exist. It is merely the product of our own vain imaginations, human neurons firing off certain “data” that we must then try and validate in a secular world.

These ideas are dangerous, as August pointed out in his piece, “The ethical consequences of the Theory of Evolution”. If self is indeed autonomous, why shouldn’t high school students gun down each other? Survival of the fittest, right? The fact of the matter is that, in their own minds, these young men had good “reason” to do this. Is it any wonder that our postmodern young people, with a lavish lifestyle that their grandparents could have never dreamed of, are so dark and miserable? Why is it that our young teenagers, who have their own TV’s, Stereos, Cell Phones, Game Boys, etc., who have never had to fight in a World War, are so angry at the very people who have spoiled them? If nothing else, these results are to be expected as they are consistent with evolutionary thought. Ideas have consequences, and the attempts to remove God from society and replace it with the idol of humanism leaves a culture “like sheep without a shepherd”. People have an inherent knowledge of an absolute moral standard, but no one to teach them where it comes from and how it must be obtained. The fact that there is recognition of an absolute moral standard (even by those who reject it) shows evidence of an Absolute Lawgiver.

“Without absolutes revealed from without by God Himself, we are left rudderless in a sea of conflicting ideas about manners, justice and right and wrong, issuing from a multitude of self-opinionated thinkers.” - John Owen

Related to the Moral Argument is the Argument from Justice. To illustrate this, let’s create a hypothetical murder case. 10 years ago, Mr. Jones murdered Mr. Smith. Up until now, evidence has been hard to come by. But today, the evidence is clear, and it clearly points to Mr. Jones as the murderer. What should happen to Mr. Jones?

The Christian worldview makes it simple. “Whoever sheds the blood of man, by man shall his blood be shed, for God made man in his own image” (Genesis 9:6). While the atheist has some inherent sense of justice, at least to the point of concurring that Mr. Jones should suffer some sort of punishment, he really has no leg to stand on. In order to justify punishment, the atheist must overcome the following obstacles:

1.) What crime was committed? Well, obviously murder. So what? What is wrong with murder? How is the murder of a fellow human being any more abominable than swatting a fly, or spraying weed killer on your lawn? After all, according to the evolutionary worldview, humans, flies, and weeds are merely the products of mutations acting upon bioactive compounds. Will there be equal punishment for all cases? Unless there is something spiritual about humans that make them different from flies and weeds, there can be no grounds for a different punishment.

2.) Who is the victim? Well, obviously, it’s Mr. Smith. The problem for the atheist is that, according to their worldview, Mr. Smith does not exist. He ceased to exist at death. Is it is right to punish a man for killing someone who does not exist? What kind of evidence will you use? Unless there is something spiritual about humans that transcend their natural bodies, Mr. Smith cannot even be pronounced dead. All we have in regards to evidence is a corpse, with no objective way to really prove that it was ever alive.

3.) Who is the criminal? Well, obviously Mr. Jones. The problem here is that Mr. Jones isn’t the exact same person that he was 10 years ago, either mentally or physically. Mentally, Mr. Jones knows new things, and has 10 more years of life experiences, bad and good, to shape his personhood. Physically, his body, from a naturalistic perspective, is totally different. All the cells that made up his body 10 years ago are gone, having been replaced by new cells. from a naturalistic worldview, Mr. Jones is a totally different person than he was 10 years ago. Can Mr. Jones rightly be punished for a crime that a different person committed? Unless there is something spiritual about humans that transcend their natural bodies, Mr. Jones today cannot be connected with anything that happened 10 years ago.

As we can see, in such a case, justice assumes a Christian worldview. Indeed, there can be no true justice without it. We certainly don’t see it in our courts. Even in our best efforts, justice will never be truly served here on earth. If we call it justice to take the life of a murderer, what kind of justice can we meet out for a double-murder? A serial killer? Adolph Hitler was never brought to justice. Even his death by his own hand was mild compared to the millions he slaughtered, and cannot be compared to the gruesome deaths suffered by so many innocent men throughout history. Our inherent sense of (and need for) justice is evidence that justice does exist, and this cannot exist is a purely naturalistic world. True justice demands the existence, not only of God, but of His judgment as well.

“For we know him who said, "Vengeance is mine; I will repay." And again, "The Lord will judge his people." It is a fearful thing to fall into the hands of the living God.” (Hebrews 10:30-31)

Friend, God’s moral law is inherently known by all, you included. It is also painfully obvious to all that we have failed to keep it, and that failure demands justice. This we know all too well. How will you escape the justice of God? Will you rely on weak excuses? Will you demand that the Almighty allow you to enter the heavenly city based on your own foolish personal view of morality? For what purpose will you condemn you own soul to Hell? Will you run to Christ? He alone will be your Rock and your Refuge.

For More Information, I suggest the following:

Apologetics to the Glory of God by John Frame
Mere Christianity by C.S. Lewis
at January 30, 2007